[The following tribute was written by Kate Michael Dimon, Granddaughter of Lieutenant Commander Charles O. Michael, Navigation Officer, pictured above, who was Killed In Action on the Morning of December 7th, 1941 during the Japanese attack]


Let me see if I can explain the day. It started out quiet enough. I searched the morning sky for signs of early morning inclement weather, none to be found. The sky a clear blue matched the water at Waikiki and I longed to swim in that crystal sea. My sister, Heidi and our cousin, Kathy and myself raced to a quick breakfast then Heidi and I drove to Pearl Harbor. Again, I found myself searching the skies for signs of something, what, I wasn’t sure and without comment it remained in the back of my mind.

It was December 6th. September 11th seemed to have taken the wind out of the country and people were still leery about flying and the NAV STATION was still under alert. We drove up to the Marine waving his hand and speaking into his “radio”, from a distance he looked important and brave, once I stopped the car, he was just a boy. We drove to the Arizona Memorial to meet up with Mr. Upton, Mr. Hughes, and Mr. Daniel Herlong, and The Rev. Father Herlong, Mary Kreigh and Mr. Soucy. Senior Chief Eggman, our Champion, was there to escort us to a boat at the Naval docks to rehearse our parts in the momentous moment. The sky was still blue and the water twinkled with the suns warm rays. A periodic gust of wind blew off the bay but nothing committal.

By 4:00 we arrived at the Arizona Memorial to board the ship that would take us to our destination. Since my sister and I were to read the names of the lost crew, we could do nothing but study our surroundings. Again, my eyes were spent on the mountain range northwest of the harbor, a steady breeze and the last warmth of the orange sun bled down around my sisters dress, lighting up my cousin Kathy’s golden hair… “Where had the sun been that Sunday morning? ah,” remembering my history, “behind the clouds.” You who had been sleeping, sipping your morning coffee, or at your post on that Sunday morning, I see now, it was the Sun, the Sun came roaring down between the clouds, invincible and with horrific surprise. “I can’t think of who to forgive”. The rock of the boat as we so gently moved towards the Utah, brought me back to our script. The smell of the tropical headwinds and the sounds of the city were gone and the sun was waning. I know that Lt.Cmdr Michael was in the officers mess, having been in the Navy I can remember what the layout of the battleships were and knew the location of the navigation quarters; “Had he been hit first?” The strains of the Bagpipe on shore brought my heart back to reality. I watched the faces of the survivors attending the memorial, each moving slowly through the moment as it happened, their eyes not meeting anyone’s. As the names were read, two bells. I turned to see each of the dead crew standing as their names were called, the ships flags flying in preparation to return to port. I strained as Mr. Hughes read the tribute to Chief Watertender Peter Tomich, he held his voice until the end as it drifted like the lay we threw into the waters, he turned, as if he saw the same thing I did.

Before I knew it the bagpipe called again, praying “Amazing Grace” as the 1st. Lt. slowly walked away leaving his imprint on each of us. As the sun slowly drowned into the Pacific, it was finished. Echo taps hauntingly calling us to look once more upon our ship. Oh, if these ships could speak, what a tale they’d tell of the hero’s and oceans rough and glory days, the wrecked hulls and voices calling back at us, these are the memories I will live with forever. As for the survivors, the voices they heard, I hoped, were of comfort. The farewell in the eyes of Mr. Soucy, Mr. Upton, Mr. Hughes, Mr. Simmons, was one of resolve, but I could also see, to my great sadness, that each of them in due time would join this quiet ship to sail once again to a heavenly destination.

December 7th, 2001: My sister Heidi, my cousin Kathy, and myself were escorted out to Ford Island at dusk, to say our own goodbye. Grandfather left the mess that morning; we’d like to think he, knowing “general quarters” meant danger, went down to Mr. Gandre, and the two died there. I left my Ensign bars in the waters beside the ship, I didn’t need them anymore, I just wanted Grandfather to know I served. As we turned to go, a rainbow rose up over the Utah’s small memorial and we could see each of you, smiling, waving, sleeves rolled up, bellbottom dungarees rippling like waves. So, Gentlemen, my heart tells a different tale, though I did not see it then, I will finish what you started, rest assured the Utah will be remembered. 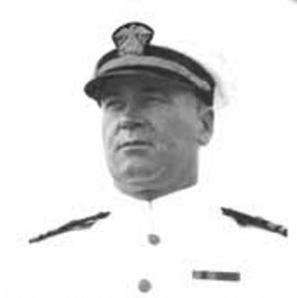