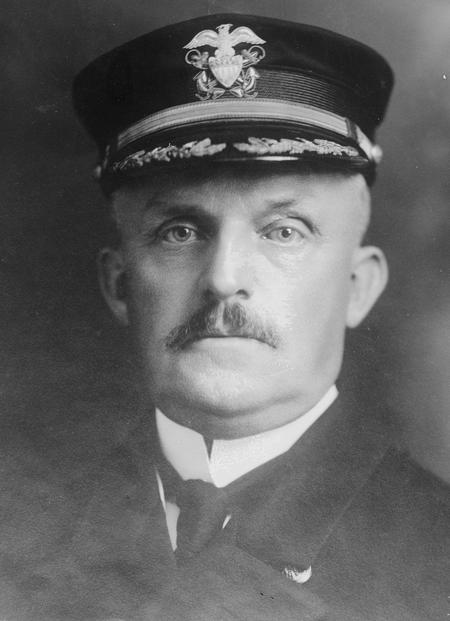 Born in Nashville, Tennessee, Albert Gleaves graduated from the United States Naval Academy in 1877. After serving on board Hartford and Trenton, he was appointed an Ensign in 1881. Assigned to many ships and stations, he commanded Cushing during the Spanish–American War and later the battleship North Dakota. Gleaves took command of USS Utah from Captain John Henry Gibbons in September of 1914. He was promoted to Rear Admiral in 1915 and in World War I he commanded the Cruiser and Transport Force. For his outstanding contribution he was awarded the Army and Navy Distinguished Service Medals.

In 1919 he was promoted to Admiral and commanded the Asiatic Fleet. While serving at the Naval Ordnance Proving Ground, Admiral Gleaves made outstanding contributions in the field of gunnery and torpedoes. While carrying out some tests on torpedo steering devices he changed these weapons from instruments of luck into instruments of precision. The gear which he tested in Cushing provided the imprints which made the torpedo the "terrible weapon" of World War I.

In spite of a life of constant action in war and peace, he found time to write a biography of Captain James Lawrence; A History of the Transport Service, and The Life of an American Sailor: Rear Admiral William Hemsley Emory, United States Navy, from His Letters and Memoirs. After a most distinguished career, he retired on January 1, 1922.

He was a companion of the Naval Order of the United States and was assigned insignia number 756.

He has been quoted as saying, "To seamen a ship becomes endowed with human virtues and faults; she ceases to be a mere inanimate thing."

There is a statue of Admiral Gleaves at the State Capitol in Nashville, Tennessee.