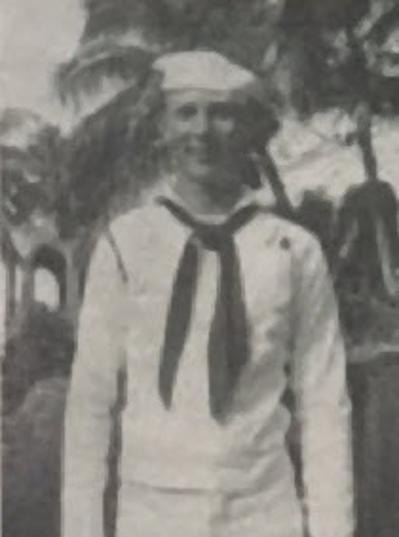 With weekend duty, the first part of my duty routine included a shower prior to the trip ashore to pick up the USS Utah station wagon. This Sunday morning's routine was to have included a pleasant drive to downtown Honolulu. Many sailors in the early liberty parties departed Utah for Fleet Landings at Pearl Harbor and Pearl City. Their ultimate destinations included Honolulu and other points of interest in the Oahu area.

First stop, the shower, then on to the mess hall and Sunday morning brunch. Upon arrival in the mess hall, strange and unusual events occurred. The duty Boatswain's Mate passed the word, "Close all watertight doors." Instinctively, I ran below to the Third Division compartment. My duty section had the responsibility to close watertight doors. Before we arrived in the Third Division compartment, other members of the duty section secured the dogs. To our surprise, water gushed in from below and the nearby compartment. Immediately after we determined the ship's perilous condition, all hands started the return trip topside.

When in situations such as this, humorous events often occur. After more than fifty years, I no longer recall who the duty compartment cleaner was that fateful Sunday morning. He stood there with his wet swab and bucket of water shouting, “Get off my wet deck!” The thought of clearing the compartment appealed to us. He jumped up in the air and fell back into the water. At this time, he observed the inrush of water. He tossed his swab and bucket into the air as he headed for the ladder.

When I reached the main deck-, the-change of clothes remained in my hand. As I peered through the hatch, Japanese planes strafed the many personnel topside. Japanese projectiles struck. the deck and hatch. All hands immediately ducked back inside. With-th& ail-clear signal, time to abandon ship arrived. My first thought was, these clothes are unnecessary. Over my head they went.

STARBOARD SIDE NOW ON TOP

With the extreme list of the ship, it was impossible to walk topside. Unable to walk up the deck and the possibility of sliding back to port, a grab for the lifeline saved the day. A quick heave passed me through. By this time, the ship listed about eighty degrees. Due to the extreme list to port, the starboard side was now 'topside.’ Yes, we actually walked along the starboard outboard blister. The old water line was covered with a wide border of greenish black goo. Up and out went my feet, landing on my buttocks. Quick as a 'splash,' I was in the water.

Bobbing up from the depths, there was that big old screw just above my head. How I avoided the screw remains a mystery. A fall from that height on to the blades of the screw could easily split a person in half. From there, it was a short swim to the closest ballard and a short climb out of the water. Temporarily, this was a safe haven. Japanese aircraft started another strafing run. Diving in, I started for the beach. A large cable stretched to the ballard provided rest in between. Nearby, a winded and tired sailor dropped into the water. I went to his aid and held him up. He was wearing those old high-topped shoes issued in boot camps. As fast as they could be removed, into the water they went. After a brief rest, the trip to the beach started again.

With the assurance we would swim together, his confidence returned, and we started for the shore. Just the thought of the Japanese strafers seemed to provide renewed energy and the shoreline was reached in record time. From there, we ran over to the trench and jumped in.

After the passage of more than fifty years, I no longer recall who the officer in the trench was. He inquired if the keys to the ship's vehicle remained in my possession. With the keys in my pocket, and transportation to the fleet landing, I was on my way. Captain Steel greeted me as I arrived to pick him up. Duty as driver occupied the next several days.

At the Pearl Harbor Receiving Station, volunteer details assembled for ships that survived the Japanese attack or received minor damage. With each ship's name called, men stepped forward to volunteer. Each time I volunteered, they said," Get back into the line." Cdr. Waris would not allow me to volunteer for shipboard duty. He said, "The need for you is urgent here." Eventually my duty station was in Navy Yard Salvage with LtCdr.

After Navy Yard Salvage, my next assigned duty was in the P.T. Boat squadrons in the South Pacific theater. Then, on to Rhode Island PT Boat school. Shortly after arrival at the P. T. Boat School, I was assigned to the Master at Arms force. Later, my assignment was to the Philippines PT base. From there to the PT Boat tender Mobjack until the end of WW-2. After twenty years in the Navy, I returned home to become a civilian.