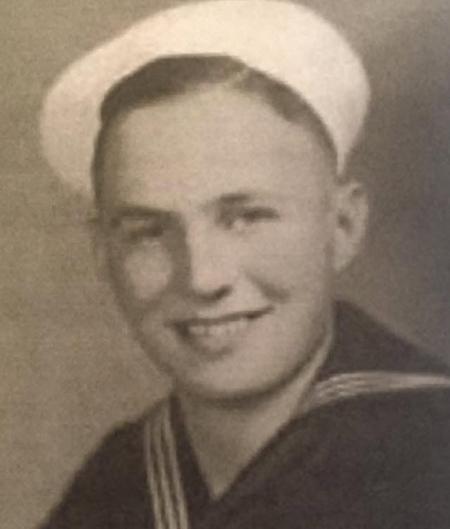 ​I will always be haunted by the events of the morning when the USS UTAH was torpedo bombed and rolled over 180 degrees.

The Radio Room was on the deck immediately above the Engine room. A compartment adjacent to the Radio Shack was the sleeping quarters for the radiomen. Airshafts, one portside and another starboard allowed main ventilation down into the engine room, and iron steps were structured up through the shafts to allow personnel to gain access from the engine room to upper decks.

My brother [Jack Durham] was on duty the morning of December 7, 1941 and I was asleep on my cot in the radio sleeping compartment. The first torpedo hit knocked me out of bed and of course woke me up very quickly. From that instant on it was a frantic struggle for survival for the whole crew.

I tried to escape first, through the airshaft off the radio room, but it was impossible. The ship had already listed so far that a "Battle Bar" [a heavy iron grate), had broken loose from an unsecured lock and completely blocked the airshaft above me, and the one at the level of the radio room had also fallen trapping members of the "black gang" below it.

When I stepped out into that shaft to escape, I remember seeing all of these things happening above and below me. I will never forget the faces of those men trapped in the Engine Room. I knew there was no way I could lift those steel grates and I also knew at that point that my chances were very slim of getting out of there myself.

The ship continued to roll, and I ran back through the radio room, then through the sleeping quarters to the other airshaft. Fortunately, the direction of the roll must have kept the "Battle Bars" in this shaft from closing. By the time I reached the air castle I was walking on the Bulkheads [ships walls].

I walked around as the ship rolled and stood on the bottom once she had turned over completely. I believe I was the next to last man alive to leave the ship. Another sailor was cut out and rescued from the double bottom of the ship later that day."

By the time I reached the aircastle the ship bad rolled to a point where I was crawling over bulkheads. I crawled across the starboard railing and worked my way around to the bottom of the ship as it turned completely over. I was standing on the keel section when Jap planes started strafing the USS Tangier, moored behind the Utah, and some of the slugs were flying on either side of me so I decided to abandon ship.

I scraped my butt pretty good on the barnacles as I slid off the bottom into the channel. As soon as I hit the water I was overcome by the heavy currents as water being sucked into the interior of the sunken ship. I would have drowned then and there had it not been that one of the heavy timbers off the deck came within reach and I grabbed on to it. I will always maintain that God and my Guardian Angel pointed that long timber toward me. Between the buoyancy of the large hunk of wood and my frantic arm flailing I made it to the surface.

The timber and I remained together for only a few minutes before Captain's Gig pulled up and hoisted me aboard. Our Communication Officer bad taken command of the Gig and was picking up survivors in the channel. After I was aboard the officer directed the Gig to pull alongside the ship behind us in order to enlist a crew with cutting torches to burn escape holes in the Utah's bottom. (Ed note: That ship would have been the USS Tangier, and for some reason they failed to furnish the equipment requested. That equipment, and a small working party of men was furnished by the USS Raleigh, berthed in front of the Utah. The sailors from the Raleigh, working with Warrant Officer Semanski and Chief McElsweney of the Utah, accomplished the heroic rescue of Fireman 2nd class Jack Vassen, from the double bottom of the Utah while being strafed by enemy aircraft. The story of that rescue is covered on this web site on the "A TT ACK ON THE UTAH" page) How, when, and if the Communication Officer LtCdr Winser knew that there were men trapped in the Utah's double bottom is beyond my knowledge.

The gig debarked several sailors, including myself, onto the old China Clipper dock across the channel. We had hardly set foot on the platform before the Japs started strafing the USS Curtiss and the USS Medusa anchored nearby. I could see the pilots clearly as the made low sweeps across the area. I discovered that throwing rocks at the planes didn't help at all.

In the meantime, my brother Jack Durham had made his way to the bow of the Utah and he and others abandoned the sinking vessel down the mooring lines to the stanchion and finally to Ford Island. Jack and I were reunited when we went aboard the U.S.S. Argonne where we were given clothing and quickie medical attention. Some corpsman doctored my butt with that old red stuff they used to use.

That night a flight of our own planes came flying in and the trigger-happy sailors began trying to shoot them down. A gun on the California, which had settled straight down into the channel, broke loose and red tracer streaks began whooshing thru the compartment on the Argonne where survivors had gathered for the night. I remember grabbing Jack's arm and heading for a spot below the water line. [Ed note: This action resulted in the death of Utah Sailor Pallas Brown, as confirmed in USS Argonne deck log and by other EW reports]