​Damon Earhart Cummings was born April 16th, 1895, in St. Cloud, Minnesota. He entered the United States Naval Academy in 1903 and graduated in 1907. Cummings's first post prior to his attaining the rank of ensign was a memorable one. He was assigned to Louisiana as a midshipman on October 17th, 1906, and participated in the world tour known as the Great White Fleet. Following his two years of sea service as a midshipman he was given the rank of ensign on 13 September 1908.

Following the completion of the Great White Fleet's mission, Cummings married Ennis F. Morris on April 17, 1909, with the service being performed by his father, Reverend C.A. Cummings. Over the next several years Cummings served on board USS Celtic (AF-2), USS Nebraska (BB-14), and USS Illinois (BB-7). During this time period he received a promotion to Lieutenant j.g in 1911. Three years later he received a promotion to full Lieutenant after another tour on board Nebraska.

On May 25, 1915, Cummings received his first official command, the gunboat Dubuque, which he commanded for the next two years. During this period Cummings received a Navy Commendation for his invention of a milling machine and subsequent gift of its patent rights to the Navy.

Following this service he was temporarily promoted to Lieutenant Commander in October 1917 and assigned to the battleship Massachusetts, whose name was changed to the USS Shawmut on 9 November 1917. Cummings would take over the role as Shawmut's executive officer in February 1918, also receiving a temporary promotion to full commander. It was during this assignment that he earned the Navy Cross for assisting in laying a mine barrage in the North Sea to prevent German U-Boats from entering the shipping lanes.

After the war ended Cummings commanded Shawmut for three months before being sent to the Naval War College for the 1919-1920 academic year. After his graduation he received his commission as a regular Lieutenant Commander retroactive to July 1, 1919. His promotion placed him in command of Naval Air Station Rockaway Beach on Long Island, New York, in addition to duty as a navigator on board USS Arkansas (BB-33) until 1923. After two years of duty in the Bureau of Construction and Repair in Washington, D.C., he attended the U.S Army War College, from which he graduated in 1926, and was assigned to USS Trenton (CL-11) as her executive officer until March 28, 1928.

For most of 1929 and 1930, Commander Cummings was working at the Bureau of Navigation in Washington, D.C. In December 1930, he was given his first official sea command, USS Sirius (AK-15), which operated off the Pacific coast, ranging from Bremerton to Alaska until 1932. In June of that year Cummings was transferred and joined the faculty at the Army War College in Washington, D.C., until he was promoted to the rank of captain on January 1, 1933.

On September 26, 1935, Captain Cummings was given command of USS Utah (AG-16) and served as her captain until May 18, 1937, when he was transferred to the 13th Naval District, Seattle, Washington, where he worked as the district's intelligence officer and later as the Director of Naval Reserves. He was given his next sea command USS Tennessee (BB-43) on November 9, 1938, which he captained until May 1940, his last duty at sea.

On December 27, Captain Cummings was assigned to the Fifteenth Naval District, Balboa, Canal Zone, and was stationed there for three years. For his exemplary service at this station during the opening phase of the Second World War, he was awarded the Legion of Merit in 1947. After his tour of duty in the Canal Zone he was transferred and took command of the V-12 unit at Dartmouth College and served in that capacity until the end of the Second World War.

Captain Cummings retired from the Navy on December 1, 1946. He died at Bethesda Naval Hospital on April 21, 1969, and was laid to rest at Arlington National Cemetery. 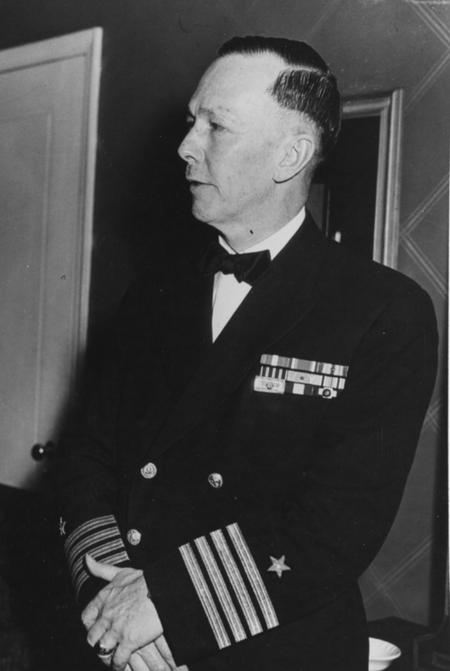