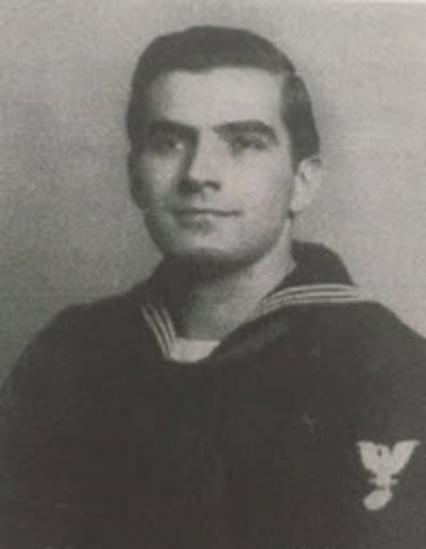 On the morning of December 7, 1941, I was below deck in my division bunk room. I was one of the communication electricians and our bunk room was just one level above the dynamo room. During the World War I, I believe our bunk room was known as the "plotting room".

I heard some kind of explosion. I did not know what was going on. I thought maybe some ammunition had exploded or somebody dropped one of the armor hatches.

Just then Gertz came down and said the Japs were attacking. A few seconds after that the general alarm sounded. The alarm was a big gong that had a single stroke. The alarm sounded about three or four times and then quit. I rushed over to the fuse panel (it was just around the corner in a small room) and replaced a blown fuse. The general alarm sounded a couple more times and quit again. Somehow word got passed to "abandon ship", so I started going toward the main ladder to climb up to the top deck.

As I reached the deck where our lockers were, I thought about going to my locker to grab some personal effects. As I looked towards my locker, I could see either smoke or powder of some kind filling the compartment. I thought that I better not go down there, so up the ladder I went.

When I finally got into the water, my hands and feet were going like crazy. I swam over to the ballard and climbed up on the cement and stood there with some other guys. The ballard was a little ways from the beach.

As we were standing on the ballard, shrapnel started falling. A piece hit the spring and ricocheted off hitting a guy in the knee. There was another guy from our division, struggling in the water below me, hollering that he couldn't swim. I went back to help this guy out.

We were standing on the ballard for a little while when a boat came by and took us to the shore. On the beach, there was a trench being dug for a sewer line. We all jumped in and took cover. We had a front row seat of the attack from the sewer line trench. As we watched and saw Jap planes get hit, boy, we would all yell!

The bachelor officers' quarters were pretty close to the trench and somehow somebody got a bottle of whiskey and we started passing it up and down the trench. It tasted pretty good that morning. I don't know how long we were in the trench, but after everything kind of quieted down we were told to go out and help put shells in belts for machine guns.

When we could no longer see any planes coming over, we started walking around out past the seaplane banger and that's when I first realized all the devastation. Everything was burnt and black. Soon a boat came along and took some of us to the navy yard. They took us to a building with a metal roof, the "beer garden" as we called it. That's where I would spend the night on a folding cot covered with mosquito netting.

The night of December 7th some of our planes came in and somebody opened fire. The next thing you know everything in the harbor opened fire. The tracers from the shooting was a sight to see. You never saw a 4th of July like that! Then the shrapnel started falling. I was worried that maybe a five "incher" that didn't hit anything and would come down, but that never happened.

Some of the guys spent the night on the USS Argonne. One of our planes was coming in when someone on the USS California opened fire. One of the bullets went through the USS Argonne and killed one guy, who was from the USS Utah, and wounded another.

The morning of December 8th, I was going through the chow line on the USS Argonne when saw the hole through the side of the ship. If you looked through the Argonne's hole, you could see the superstructure of the USS California.

Later on, they gave us a card to send home to our folks to let them know we were OK. My card took over a month before they got it, others took 45 days or longer, and even others were never received.

My next assigned duty was on the USS Honolulu. During the attack on December 7th, a bomb came through the dock where the USS Honolulu was docked and put a big dent in the side of the ship. The crew of the Honolulu flooded the ammunition hold right away to prevent any ammunition from exploding. When they started bringing out the ammunition, you should have seen how twisted and bent everything was. It's a wonder how nothing went off. All of us from the Utah slept topside for a couple weeks. We just didn't want to go down below.

The USS Honolulu was repaired in about 3 weeks. I stayed aboard her until September 1943 until I was transferred to EiC school in Washington D.C.

"For distinguished service in the line of his profession while serving on board the U.S.S. UT AH, during the attack on the Fleet in Pearl Harbor, Territory of Hawaii, by Japanese forces on December 7, 1941, upon hearing the general alarm sound and cease abruptly after a few strokes, he immediately obtained and

replaced fuses on the panel in Central Station, and continued to replace such fuses which repeatedly blew out until ordered to abandon ship. He then assisted several men up the canted ladders from below decks and after abandoning ship went to the assistance of Samuel M. Nabors, fireman third class, U.S. Navy,

who was in distress in the water. His courage, initiative and devotion to duty were in keeping with the best interests of the naval service."