Just prior to 0800 on the morning of December 7th, 1941 I was gazing out of a starboard porthole on my ship, the USS Utah. As a member of the ship's baseball team I was concerned with what the weather would be like that day.

Looking in the direction of Ford Island I noticed smoke rising into the air and heard the sound of explosions. Looking up, I saw Jap planes bombing Ford Island. Almost simultaneously a torpedo hit the ship on the port side.

A Gunnery Officer, Lieutenant Hauck, came by and said, "let’s go down below and check watertight doors." We went and saw that everything was secure. We also saw water coming down the passageway and decided we should get out of there.

We went up two flights of stairs. At the next flight of stairs guys were congregating on the stairway. We needed to get out of there because the ship was listing 35 degrees by then and at that time, I was feeling frustrated. I knew that something bad was going to happen.

The reason the men were crowding the stairway was because had they left the ladder, they would have become exposed to machine gun fire. Finally, the ladder was cleared, and the ship was really listing by that time, and I had about forty feet to go out and get off the ship. I hit the deck running. I noticed that the gangway, and boat materials, fenders and other loose objects were breaking loose and falling from the side of the ship.

I grabbed a beam in the overhead and at that time the water pushed me up against the overhead. I estimated that I had 15 to 20 feet to go and swam underwater until I estimated I had gone that distance.

When I came up, I was covered with oil all over, especially my hands, face and eyes. So, I was picked up by one of our boats and carried to the dispensary to get my face cleaned up and get the oil washed from my eyes.

Then we commenced assembling machine guns and ammunition. I was a Gunners Mate and that was down my line. We got an assembly line going and ammo belts ready for distribution to any functioning gun crews.

After the attack I was sent to the USS Vestal, one of the Base Force Ships for food and bunking for the night. After dark I was on gun watch and was wearing the phones and word came down that unidentified planes were approaching. Amid the chatter on the ships phone lines, then they changed it and said friendly planes were approaching. "Do not fire. Do not fire" were the words heard amid the chatter on the sound powered phone lines.

Evidently some gun crews were not connected to the phones and noticed across the bay off the California they were firing at a plane. I could see tracer bullets were very close to my gun station. I touched my partner and told him to lay low on deck. After that I got off watch and turned in. We did not get much sleep that night.

(Ed. Note: Apparently the incident described by James occurred when the planes from the USS Enterprise attempted to land at Ford Island the evening of December 7th)

The next morning, we got word that planes were coming in from the "States" early in the morning. I believe they were Bl7's. 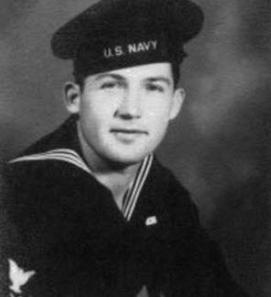