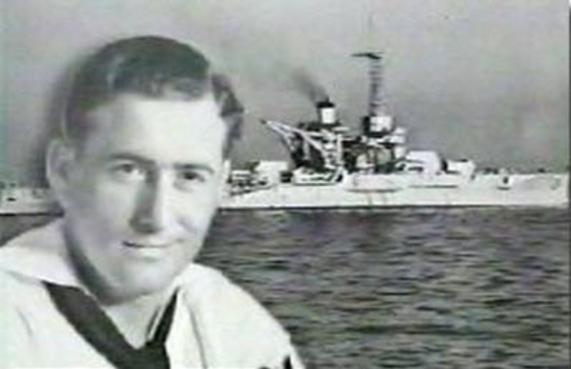 [Source: Oral history provided courtesy of the Historian, Bureau of Medicine and Surgery]

I had just had breakfast and was looking out a porthole in sick bay when someone said, "What the hell are all those planes doing up there on a Sunday? " Someone else said, "It must be those crazy Marines. They'd be the only ones out maneuvering on a Sunday." When I looked up in the sky I saw five or six planes starting their descent. Then when the first bombs dropped on the hangers at Ford Island, I thought, "Those guys are missing us by a mile." Inasmuch as practice bombing was a daily occurrence to us, it was not too unusual for planes to drop bombs, but the time and place were quite out of line. We could not imagine bombing practice in port. It occurred to me and to most of the others that someone had really goofed this time and put live bombs on those planes by mistake.

In any event, even after I saw a huge fireball and cloud of black smoke rise from the hangers on Ford Island and heard explosions, it did not occur to me that these were enemy planes. It was too incredible! Simply beyond imagination! "What a SNAFU," I moaned.

As I watched the explosions on Ford Island in amazement and disbelief, I felt the ship lurch. We didn't know it then, but we were being bombed and torpedoed by planes approaching from the opposite (port) side.

The bugler and bosun's mate were on the fantail ready to raise the colors at 8 o'clock. In a matter of seconds, the bugler sounded "General Quarters." I grabbed my first aid bag and headed for my battle station amidship.

A number of the ship's tremors are vaguely imprinted in my mind, but I remember one jolt quite vividly. As I was running down the passageway toward my battle station, another torpedo or bomb hit and shook the ship severely. I was knocked off balance and through the log room door. I got up a little dazed and immediately darted down the ladder below the armored deck. I forgot my first aid kit.

By then the ship was already listing. There were a few men down below who looked dumbfounded and wondered out loud, "What's going on?" I felt around my shoulder in great alarm. No first aid kit! Being out of uniform is one thing, but being at a battle station without proper equipment is more than embarrassing.

After a minute or two below the armored deck, we heard another bugle call, then the bosun's whistle followed by the boatswain's chant, "Abandon ship...Abandon ship."

We scampered up the ladder. As I raced toward the open side of the deck, an officer stood by a stack of life preservers and tossed the jackets at us as we ran by. When I reached the open deck, the ship was listing precipitously. I thought about the huge amount of ammunition we had on board and that it would surely blow up soon. I wanted to get away from the ship fast, so I discarded my life jacket. I didn't want a Mae West slowing me down.

Another thing that jolted my memory was how rough the beach on Ford Island was. The day previous, I had been part of a fire and rescue party dispatched to fight a small fire on Ford Island. The fire was out by the time we got there but I remember distinctly the rugged beach, so I tied double knots in my shoes whereas just about everyone else kicked their's off.

I was tensely poised for a running dive off the partially exposed hull when the ship lunged again and threw me off balance. I ended up with my bottom sliding across and down the barnacle encrusted bottom of the ship.

When the ship had jolted, I thought we had been hit by another bomb or torpedo, but later it was determined that the mooring lines snapped which caused the 21,000-ton ship to jerk so violently as she keeled over.

Nevertheless, after I bobbed up to the surface of the water to get my bearings, I spotted a motor launch with a coxswain fishing men out of the water with his boot hook. I started to swim toward the launch. After a few strokes, a hail of bullets hit the water a few feet in front of me in line with the launch. As the strafer banked, I noticed the big red insignias on his wing tips. Until then, I really had not known who attacked us. At some point, I had heard someone shout, "Where did those Germans come from?" I quickly decided that a boat full of men would be a more likely strafing target than a lone swimmer, so I changed course and hightailed it for Ford Island.

I reached the beach exhausted and as I tried to catch my breath, another pharmacist's mate, Gordon Sumner, from the Utah, stumbled out of the water. I remember how elated I was to see him. There is no doubt in my mind that bewilderment, if not misery, loves company. I remember I felt guilty that I had not made any effort to recover my first aid kit. Sumner had his wrapped around his shoulders.

While we both tried to get our wind back, a jeep came speeding by and came to a screeching halt. One of the two officers in the vehicle had spotted our Red Cross brassards and hailed us aboard. They took us to a two- or three-story concrete BOQ (bachelor officer's quarters) facing Battleship Row to set up an emergency treatment station for several oil-covered casualties strewn across the concrete floor. Most of them were from the capsized or flaming battleships. It did not take long to exhaust the supplies in Sumner's bag.

A line officer came by to inquire how we were getting along. We told him that we had run out of everything and were in urgent need of bandages and some kind of solvent or alcohol to cleanse wounds. He ordered some one to strip the beds and make rolls of bandages with the sheets. Then he turned to us and said, "Alcohol? Alcohol?," he repeated. "Will whiskey do?"

Before we could mull it over, he took off and in a few minutes he returned and plunked a case of scotch at our feet. Another person who accompanied him had an armful of bottles of a variety of liquors. I am sure denatured alcohol could not have served our purpose better for washing off the sticky oil, as well as providing some antiseptic effect for a variety of wounds and burns.

Despite the confusion, pain, and suffering, there was some gusty humor amidst the pathos and chaos. At one point, an exhausted swimmer, covered with a gooey film of black oil, saw me walking around with a washcloth in one hand and a bottle of booze in the other. He hollered, "Hey Doc, could I have a shot of that medicine?" I handed him the bottle of whichever medicine I had at the time. He took a hefty swig. He had no sooner swallowed the "medicine" then he spewed it out along with black mucoidal globs of oil. He lay back a minute after he stopped vomiting, then said, "Doc, I lost that medicine. How about another dose?"

Perhaps my internal as well as external application of booze was not accepted medical practice, but it sure made me popular with the old salts. Actually, it probably was a good medical procedure if it induced vomiting. Retaining contaminated water and oil in one's stomach was not good for one's health.

I remember another incident. A low flying enemy pilot was strafing toward our concrete haven while I was on my knees trying to determine what to do for a prostrate casualty. Although the sailor, or marine, was in bad shape, he raised his head feebly when he saw the plane approach and shouted, "Open the doors and let the sonafabitch in."

Events which occurred in seconds take minutes to recount. During the lull, regular medical personnel from Ford Island Dispensary arrived with proper supplies and equipment and released Sumner and me so we could rejoin other Utah survivors for reassignment.

When the supplies ran out at our first aid station, I suggested to Sumner that he volunteer to go to the Naval Dispensary for some more. When he returned, he mentioned that he had a close call. A bomb landed in the patio while he was at the dispensary. He didn't mention any injury so I shrugged it off. After all, under the circumstances, what was one bomb more or less. That afternoon, while we were both walking along a lanai (screened porch) at the dispensary, he pointed to a crater in the patio. "That's where the bomb hit I told you about." "Where were you?", I asked. He pointed to a spot not far away. I said, "Come on, if you had been that close, you'd have been killed." To which he replied, "Oh, it didn't go off. I fled the area in a hurry."

Sometime after dark, a squadron of scout planes from the carrier Enterprise (two hundred or so miles out at sea), their fuel nearly depleted, came in for a landing on Ford Island. All hell broke loose and the sky lit up from tracer bullets from numerous antiaircraft guns. As the Enterprise planes approached some understandably trigger-happy gunners opened fire; then all gunners followed suit and shot down all but one of our planes. At least, that's what I was told. Earlier that evening, many of the Utahsurvivors had been taken to the USS Argonne (AP-4), a transport. Gunners manning .50 caliber machine guns on the partially submerged USS California directly across from the Argonne hit the ship while shooting at the planes. A stray, armor-piercing bullet penetrated Argonne's thin bulkhead, went through a Utah survivor's arm, and spent itself in another sailor's heart. He died instantly.

The name Price has been stored in my memory bank for a long time as this fatality but, at a recent reunion of Utah survivors, another ex-shipmate, Gilbert Meyer, insisted that Price was not the one killed. I didn't argue too long because I recalled meeting two men at the Pearl Harbor Naval Hospital several weeks after the raid who walked around with their own obituaries in their wallets--clippings from hometown newspapers.