l was a radioman third class when I reported aboard the UTAH after being transferred from the U.S.S. Bobolink, a seagoing tug. On the evening or December 6, I borrowed 20 dollars from another member of the radio gang and went into Honolulu to buy some Christmas cards. On my return, the bunk spaces assigned to the radio gang were full and I had to take my bedding up to the mess hall to sleep. The breakfast crew routed me out at about 0600 at which time I returned to my assigned bunk space, two decks down, for a few more hours of "sack time". The next thing I was aware of was a dull thud and a jarring of the ship followed by a second thud. I was fully awake by then and assumed we were being maneuvered by tugs. About this time a group of fellow sailors came through the compartment and proceeded up the hatchway. I was still lying in the bunk when another sailor came out of the hatch and with bulging eyes and excitedly said “you’d better get out of here." I immediately jumped up, put on my dungarees and headed out, still not knowing what was going on.

I entered the hatch and while climbing the ladder I noticed the ship was beginning to list. Arriving on the sloping main deck, the first thing I saw was a single engine fighter plane making a low pass. As he banked, I saw the two red circles on the wings~ a Japanese fighter! I needed no further explanation as to what was going on. The sound of gunfire and columns of black smoke were everywhere.

Meanwhile, the ship continued to list causing the 6 by 12 timbers on the deck to tumble into the water Crew members in the water below were squarely under the path of the beams. I decided to leave in the other direction which was opposite to the roll of the ship. I was soon walking across the hull of the ship which was now parallel with the water. I continued on, attempting to see if the water below was clear of debris. However. I lost my footing when I came to the original mossy, slimy water line. I shot off the side and fell about 20 feet into the water, luckily without landing on any floating objects.

At this time, we were being strafed by the Jap planes I decided to swim to shore rather than joining a group of sailors clinging to pilings which were closer than the beach. Arriving ashore, I joined several other sailors taking shelter from the continued strafing. We huddled for cover in an open ditch while planes roared overhead. While prone in the ditch, we observed formations of what later proved to be high altitude Japanese bombers above the harbor.

A medical officer assumed control of our group and performed minor first aid on various sailors as they reached our area. Luckily there were no major wounds requiring serious treatment since our new-found leader had discovered the liquor cabinet in nearby officer's quarters and became unable to continue his assumed duties. A jeep came by at this point and he was taken away along with several sailors.

Our group gradually left the officer's quarters by walking or being picked up by occasional 1eeps as they came by. I walked across the runway to the mess hall which was being used as the check point for survivors and was logged in by one of the Utah officers.

At this lime survivors were being assigned duties as conditions dictated. I was assigned with a group which was sent to the USS California to help offload supplies in order to stabilize the ship as she was listing and taking on water. The ship settled to the shallow bottom in an upright attitude. The working party reported back to the headquarters area where we were fed our evening meal of baloney sandwiches and coffee.

Many ship’s survivors spent a sleepless night under mess tables as sporadic firing, which proved to be our own, continued until dawn. I never saw my benefactor again. That 20-dollar loan at 4% compound interest sixty-four years later would be worth S257.00 dollars! The change from the 20-dollar bill is still in my wallet in my locker down under water in the USS. UTAH. 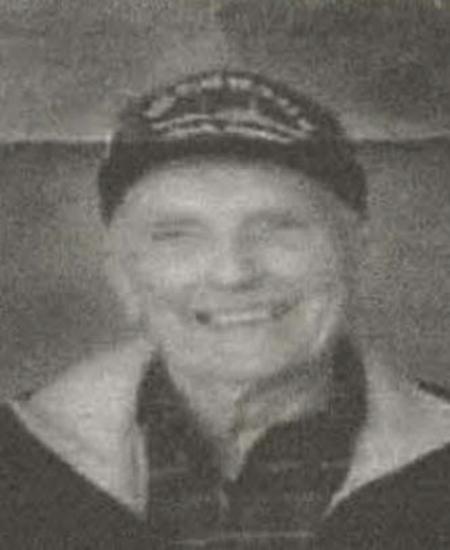